Introduction to Origin Spirits and its products

Origin Spirits is the baby of Patrick Shelley (picture above). Founded in 2015, the company currently holds three different products – single malt vodka, gin and whiskey. Patrick previously worked for LVMH and loves his whiskies! However, he dislikes vodka because he couldn’t understand why people enjoy a drink that is tasteless! When Patrick started his own company, he decided to create a vodka that he likes to drink. He found his answer in local Irish barley and he swiftly set to work to develop a series of products made from malted barley.

Kalak is the phonetic spelling of the name of an Irish Celtic goddess. The name of the goddess is Cailleach and she is the Queen of Winter. Legends have it that she appears every winter to protect the animals from the harsh weather and when spring arrives, she turns into stone. She is the closest thing to Mother Nature that the Celts had; the embodiment of the darker, more powerful side of nature. Kalak takes her name as a reflection of Ireland’s terroir. The bottles hold Ireland, her weather and her people’s ancient knowledge in distillation.

Origin Spirits sources local Irish barley from the South East of Ireland as the farmers follow a strict chart of sustainability. The wort from the fermentation is distilled four times in a copper still to make sure that the vodka hits 96% abv as per the rules from the European Union. These are then watered down to 40% before bottling. The vodka is clean and smooth, with notes of butter cookies, salt and some fruitiness. It is definitely not the usual vodka that we see in the market!

What got us really excited, however, is the PEATED Kalak Single Malt Vodka. The peated version is technically a cask-aged vodka. Origin Spirits buys virgin American oak casks and charred them with peat fire to infuse the cask with smoke. The vodka is put into the casks for four months to allow the spirit to develop a delicious smokey flavour on top of the buttery character from its standard single malt vodka expression.

Origin Spirits uses the base spirits from its vodka production to create a floral and complex gin. The four-time distilled base spirit goes through a fifth distillation with five botanicals carefully sourced to emerge as Ornabrak Gin. The five botanticals are juniper berries, lemon peels, angelica roots, Douglas fir, and lemon verbena. The distilled gin is cut at 76% abv and watered down to 43% abv before bottling. The nose is full of citrus peels (think orange and lemon), hint of white pepper, gentle juniper notes and lavendar. The palate is smooth with citrus peels and lavender petals. The finish is full of orange and lavender. It is also drying which makes you want to have more.

Currach single malt Irish whiskey is the one bottle from the entire offering that got us jumping up and down with impatience. The whiskey matures in ex-bourbon casks before getting a finish in a seaweed-infused cask for two to three months! How exotic is that!?

When Patrick first decided to do a whiskey, he wanted to add a new element to his whiskey. As he looks into Ireland’s terroirs, he stumbled upon seaweed. The seaweeds that he uses grow in abundance around Ireland’s coasts and the family of harvesters whom he works with takes pride in their ability to keep the business sustainable through their hand-harvesting technics.

Patrick experimented with seaweed and oak chips extensively before going to full production. What they do is to first cook and dry the seaweed to remove the natural “fishy smell”. The team uses 0.5kg of dried seaweed per virgin American oak cask. They lit a fire using the seaweed as a sort of fuel. Once the fire is stable, they closed the cask and then rolled it around to ensure the burning seaweed reaches every part. They repeated the process six times for each cask.

Cocktails from the Spirits

The session also started and ended with cocktails made from The Other Roof. We started with Espresso Smokatini, which is a cocktail made from espresso and PEATED Kalak Single Malt Vodka. It was superbly delicious! The creamy foam increased the enjoyment of the cocktail. Any coffee lover needs to try it!

The second cocktail is Zucien Gaudin, made with Ornabrak Gin. The addition of Campari made the cocktail rather bitter, so it wasn’t as enjoyable as the first one. However, anyone who is in love with Campari would definitely fall in love with this one!

Where to buy Origin Spirits’ products?

As usual, you can find all the products (except the cocktails) retailing at The Whisky Store. Prices are reasonable so go ahead and buy them! Do tag WhiskyGeeks and The Whisky Store on social media when you crack the bottles open and have a go! 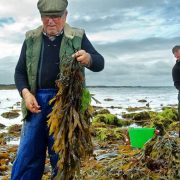 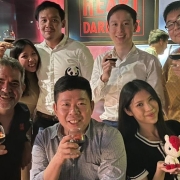 Meeting the man behind a Kombu Whiskey: Origin Spirits
Scroll to top