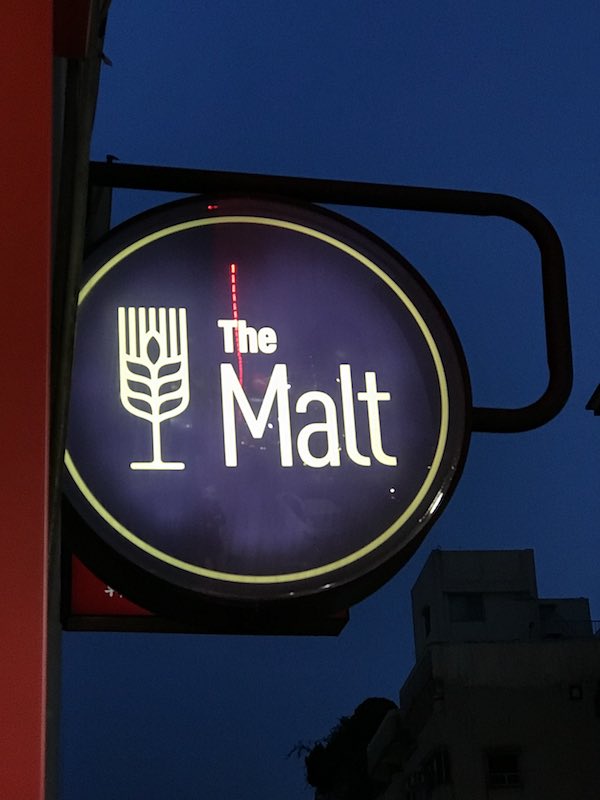 Before we went on our recent Taiwan trip, we kept hearing many good things about The Malt, a bespoke whisky bar in Taipei. We made it a point to visit the bar in Taipei, as we need to find out just how good it is. The Malt is in the Da-an district in Taipei, and you could walk to the bar after taking the subway to Da-an station. It is quite a far walk as the bar is along a side road. If you  don’t know the way, you can always take a cab.

Choc and I chose to walk as we were out in the area that day. Walking in Taipei City is an enjoyable task because there are so many things to see, and eat. Haha…Along the way to The Malt, we encountered boutique shops, food stores with long Q and even pushcarts selling irresistible food. 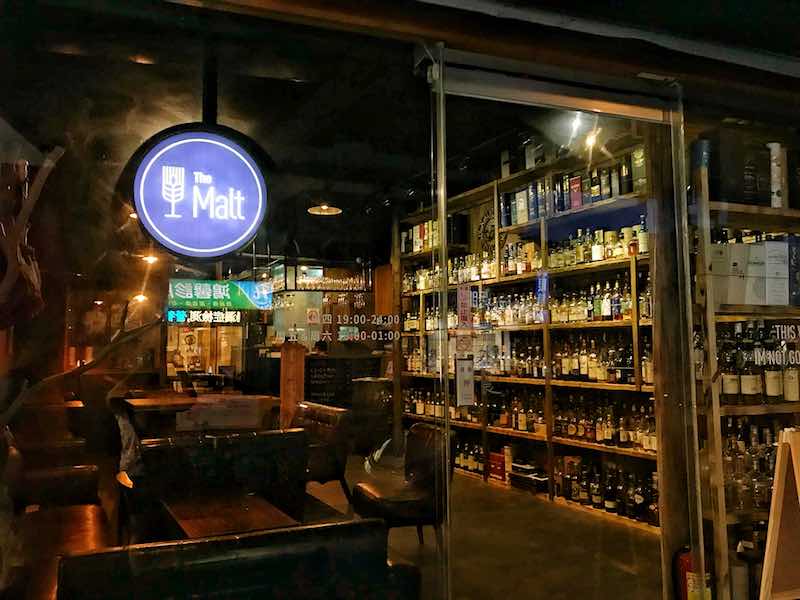 The Malt, Taipei – Outside looking in

When our meandering finally brought us to The Malt, this is what we found. As we were early, the bar was quiet. Walking into the bespoke bar was like stepping back in time. The rows of whiskies on the shelf on the right awed us into silence, and we walked, almost reverently, to our seat at the corner, near the back of the bar.

The boss of the bar explained how things work at the bar. They only sell whisky by the glass, and every bottle on the shelf is available for our choice. What we need to do is to walk to the shelf, choose our bottle, and bring it to the bar counter. They will pour the whisky for us and serve it at our table. 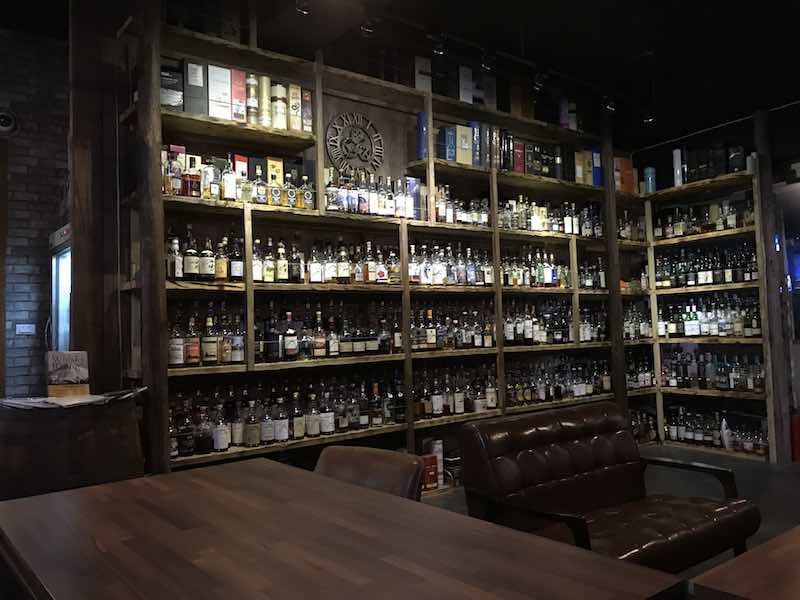 The Whisky Selection at The Malt

The selection at The Malt is unbelievable. Each row of the shelf holds three tiers of whisky, and every one of them has a tag with the price by the glass at the back. We found many treasures, including the Yamazaki Mizunara 18 years old, a complete range of Yoichi as well as old and rare Springbanks. We also saw a lot of independent bottling from the usual suspects – G&M, SV – as well as Taiwan’s independent bottlers – HNWS, The Drunken Master and Vie la Vie. Of course, there are also Taiwan exclusive from Arran, Bruichladdich and Glenlivet. The Malt cannot be called a Taiwanese bar if it does not have a range of Kavalan and Omar expressions, so we are delighted to see a couple of Omar bottles and an extensive range of Kavalan. 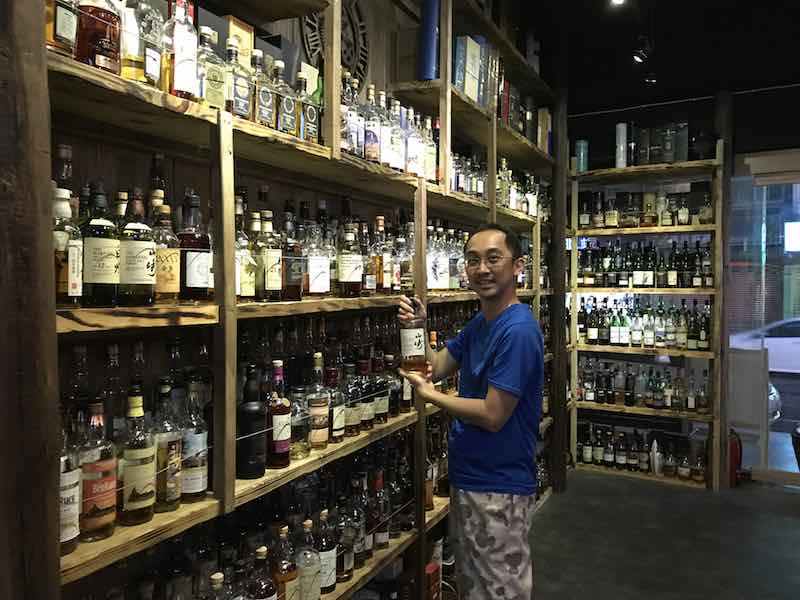 Choc with the Yamazaki Mizunara 18 Years

Naturally, Choc and I went for the unique stuff that we do not get in Singapore. In case you are wondering, no, we did not touch any Japanese whiskies. It is not that we do not like them, but that they are more expensive than what we would like to pay. My first choice was an Arran single cask, which I had been wanted to try for the longest time. 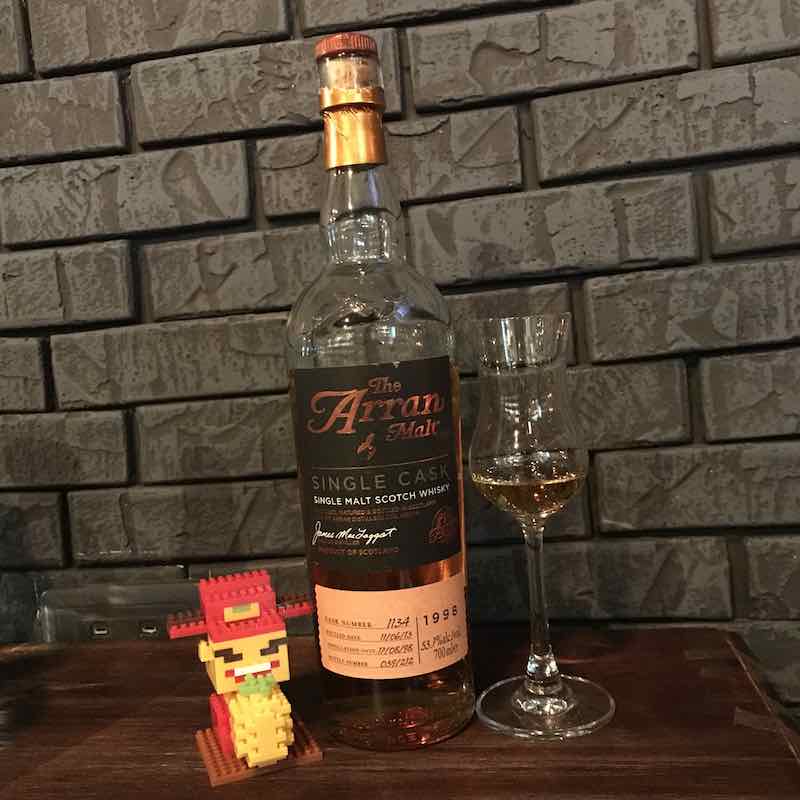 Choc chose an independent bottling of Bruichladdich. The Stillman’s Dram bottled the liquid after 27 glorious years. 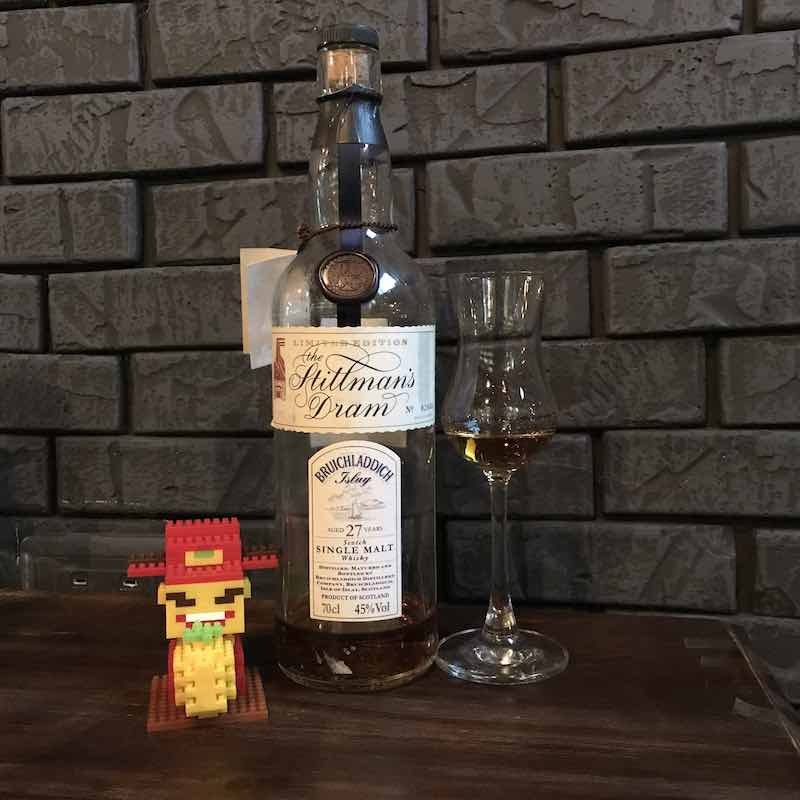 Our first drams showed us what The Malt has to offer, and we continued to explore their vast collection after the first dram. I chose a Littlemill eventually (how can I not pick one?) from The Exclusive Malt. It is a 1988 expression matured in an ex-sherry hogshead. 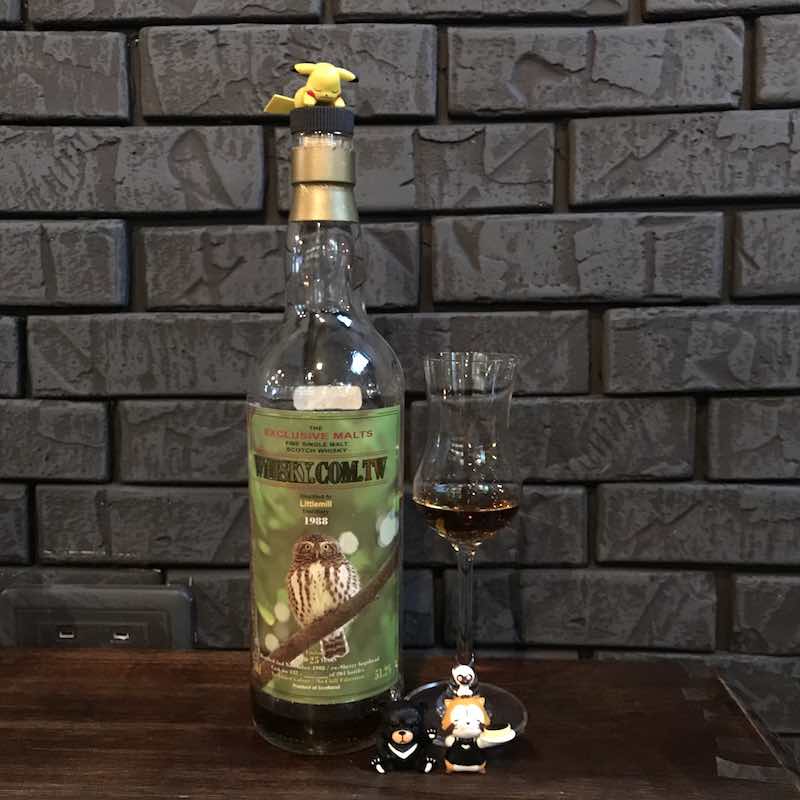 Littlemill 1988 from The Exclusive Malt

As for Choc, he is more greedy. He has two favourites from The Malt. The first one is an HNWS x Glen Castle Tormore 28 years. It is a sherry bomb without its undesired companion – sulphur. It was a sweet and flavourful dram with all the right notes in the right place. 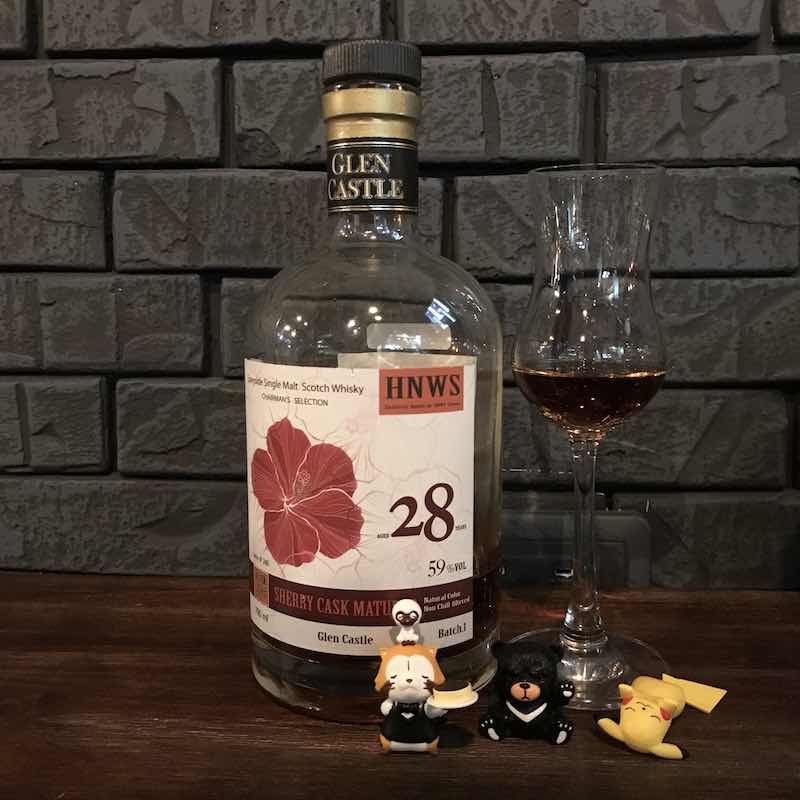 The second one is a Rosebank 14 years from Blackadder. It is from the Raw Cask series, so we know that it is at cask strength. It was an expensive dram, but Choc loves it! As for me, I still prefer the official Rosebank bottling, especially the Rosebank 21!

I am sure that you know that we had more whiskies than what we shared above. However, we are not posting every one of them here as we had shared them previously on our Facebook page. Check them out if you have not!

As a reminder to myself that there are other bottles which I had not tried, I took a picture with bottles of my favourite working distillery – Bruichladdich! 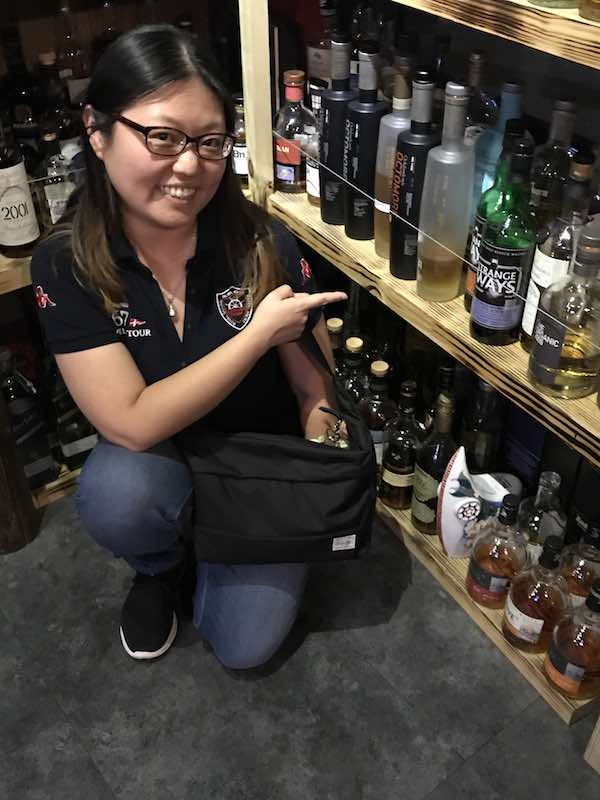 If you are in Taipei or heading to the beautiful city anytime soon, be sure to head over to The Malt. It has everything that a whisky lover needs and you can stay there from the moment it opens till the time it closes. That was what we did on our first night at The Malt, and we had eight drams between us! The second night that we went was a Friday, and the bar was a lot more crowded. As we had a long day, we called it quit earlier. Nonetheless, we still managed to have seven drams between us.

The bespoke bar that is The Malt is a place for you to chill and relax. Whether you are alone or in a group, it is a great bar to enjoy some whiskies while in Taipei. 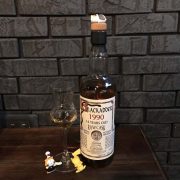 Visiting Barbershop at The ArtHouse
Scroll to top