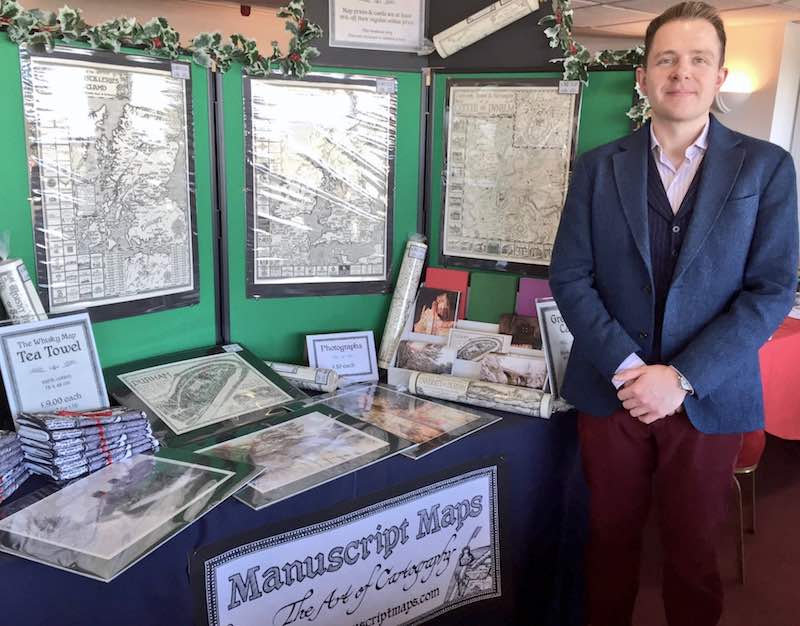 Do you like ancient maps? The kind of maps that wow you from the first moment because they were hand-drawn with beautiful details. If you do, you should check out Manuscript Maps.

Manuscript Maps belongs to Mr Kevin Sheehan, a British cartographer who drew all his maps by hand. If you are wondering why WhiskyGeeks is talking about maps, that’s because Kevin has drawn impressive maps of Scotland’s whisky distilleries!

Here’s a picture of one of his latest version: 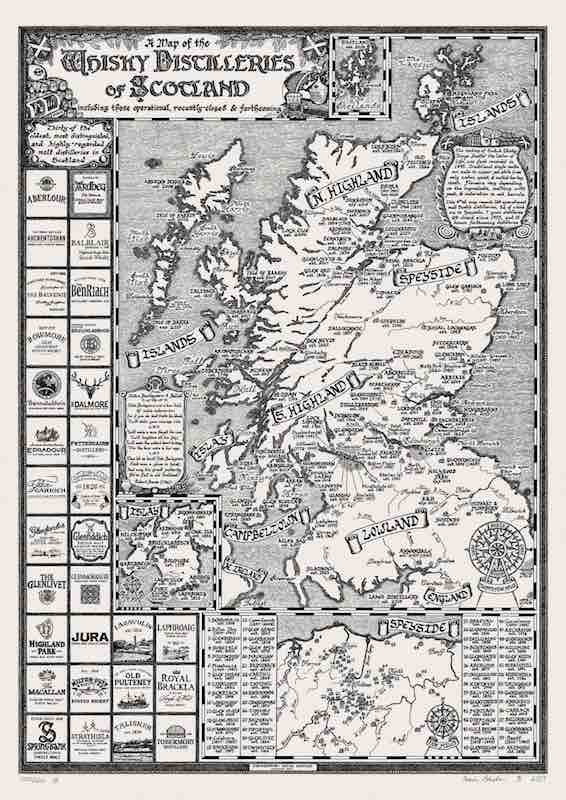 Did you marvel at the details on the map? Well, the physical one is even more impressive! Geek Choc bought the whisky map from Kevin, and he was stunned by the beauty of it. “It is amazing just how Kevin can include such minute details like tiny lines to create the shading of the sea. I’ve never seen such excellent artistry!” Geek Choc exclaimed at our headquarters when the map arrived! Well, he was too excited to say anything else after that.

So, as a team, we decided to reach out to Kevin and asked him for an exclusive interview with us, and he agreed to do so. We conducted our conversation through a couple of emails and Kevin kindly provided us with some excellent photos too!

Welcome to the World of Whisky Distilleries

Kevin spoke about the history of the whisky map in our first interview with him. His first whisky map was hand-drawn in late-2014. Kevin began with a detailed plan, before drawing the distilleries in pencil and then go over each line with dip pens and ink with different calligraphic nibs. Just as Geek Choc has noticed, every tiny line is hand-drawn, even the shading of the sea. The whisky map took more than 120 hours to draw (that works out to about three months). Kevin also took time to research and communication with the distilleries in Scotland to feature them on his whisky map.

Kevin has printed three editions of his whisky map so far. Each version has been popular, and in fact, the whisky map is his bestseller! He prints each map on 200-300 gsm textured paper, and he numbered, signed and dated every single one of them. The maps at A2 sized, so it is easy to hang them up at home. 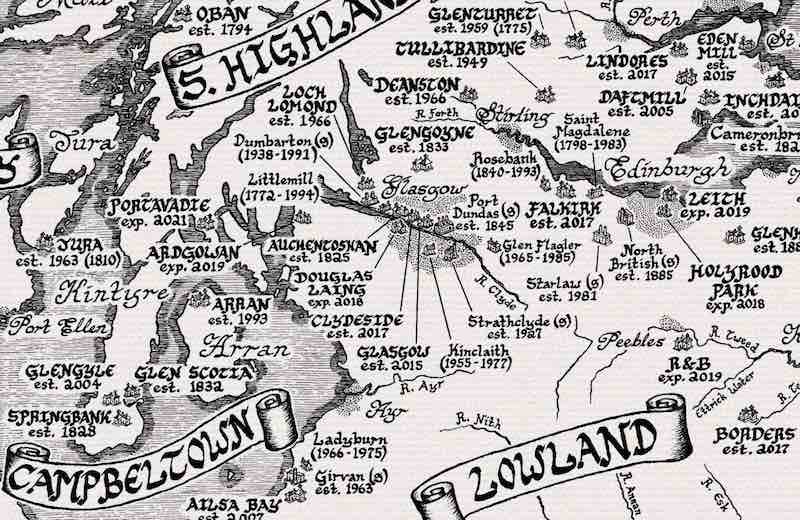 Kevin has an impressive education in the art of map-making. His passion for maps started at childhood, where he drew fantasy Tolkien-style maps. His love for maps led him to do many art classes in his youth and began his journey in the art of map-making. As an undergraduate in Durham, Kevin started to draw maps of the area as gifts for his family and friends. He also took his Master degree in Medieval and Renaissance History and took a class with Mr Paul Harvey, the world expert in medieval mappaemudi. He was so enthralled by the art of map-making by then and pursued his passion with a PhD in the history of cartography.

During his days as a PhD student, the university hired Kevin to draw maps of Durham University and Durham Pub. They sold the prints in the new visitor centre at the school. As you can guess, the maps were a huge hit with visitors. Kevin graduated in 2014 and founded Manuscript Maps. He never looks back since.

Kevin is a whisky lover just like the rest of us. That explains why his first ever map drawn for his company is the whisky map! He loves his Scotch and Irish whiskies, as well as Japanese whiskies. He shared that he like lightly peated whiskies that are well-balanced, so his choices tend to lean towards Speyside and some of the Islay whiskies. Kevin’s favourite distilleries (so far) are Bruichladdich, Bunnahabhain, Lagavulin, Aberlour and Fettercairn. Nonetheless, Kevin’s love for whisky usually leads him to buy whatever is on sale!

Kevin is experimenting with new products for his whisky map. He has printed the map on tea towels and is planning to release a jigsaw puzzle of the map by the end of November!

If you like the whisky map, there is the chance that you will love the gin map that Kevin has drawn as well. It is his second love, after the whisky map. Illustrated in the same dimension and style, it is a perfect complement to the whisky map!

If you are keen to buy the whisky map (or the gin map), you can visit Manuscript Maps right here. He ships internationally so you don’t have to worry that you can’t buy this beautiful map.

You can find Kevin on these social media platforms too:

If you are keen to purchase the maps, do remember to enter the code “WHISKYGEEKS” during check out so that you get 20% off any map you buy! Caring is sharing! Do tell all your whisky friends and head over to www.manuscriptmaps.com. 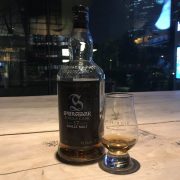 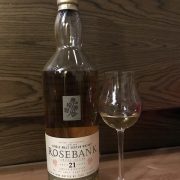