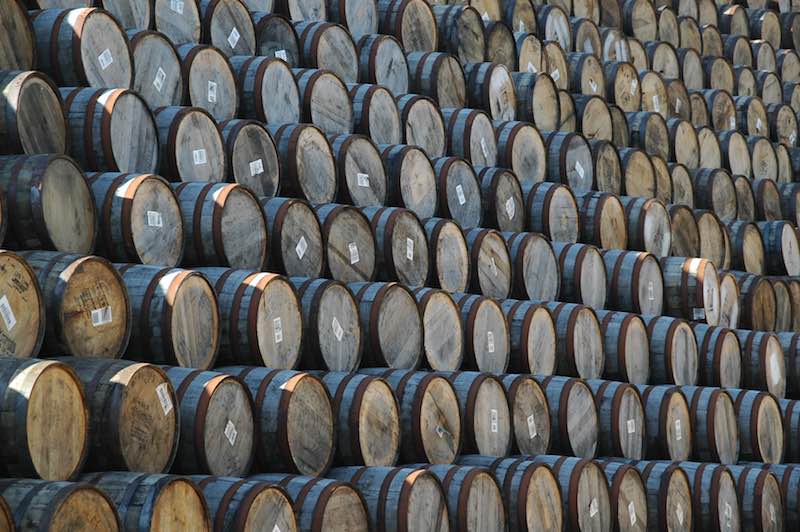 It is common for a bottle of whisky to state the type of cask or barrel used during maturation on the label. It is especially so when you buy a bottle from independent bottlers. Do you know that the whisky cask type and size influence the liquid inside the bottle that you bought?

One of the basic things is to remember that the smaller the cask, the more contact it has with the liquid inside. The contact between the wood and the liquid has a big influence on the final product.  Hence, we come up with this short guide to help you understand the different types and size of casks better.

The 10 common types of whisky casks

A blood tub is a small cask with a capacity of only 40 litres. It is used in beer making. Distilleries use the blood tub for maturation if they wish to mature a limited run of whisky. The cask has an elongated oval shape that makes transportation easy, even on horseback.

A quarter cask is a smaller version of the American Standard Barrel (ASB), a quarter of its size to be exact. With a capacity of 50 litres, it is one of the most reactive casks for spirits. Whisky distilleries use the quarter cask to give flavours to whisky quickly as the size creates the most contact between the spirit and the wood.

The ASB is a slightly smaller version of a hogshead with a capacity of 200 litres. Created mainly for the ease of use in the modern world, the ASB is made of American white oak that is widely used in the bourbon industry. After its first fill in bourbon, the ASB is popular among the Scottish and Irish whisky distilleries for their whisky maturation.

This is one of the most commonly used casks for whisky maturation. The American white oak hogshead is widely used to mature bourbon as a new cask before shipping out to Scotland and Ireland for the maturation of whisky. Its name comes from a 15th century English term ‘hogges hede’, which refers to a unit of measurement equivalent to 63 gallons. If you have a bottle of whisky matured in a bourbon cask, it is likely to have matured in a hogshead or an ASB.

These are usually known as “wine casks” as they are widely used throughout the wine industry. They are different from the other casks and barrels because they are not bounded by mental hoops. Instead, they are bounded by wooden stripes. These casks are normally used in the whisky industry to give a “wine cask finish” to the final whisky.

A butt also has a capacity of 500 litres. Made mostly from thick staves of European oak, this tall, narrow cask is widely used in the sherry industry in Spain. Butts are the most common type of sherry casks found in the whisky industry.

A port pipe looks like a regular barrel that is stretched from both ends. It is made from thick staves of European oak and has the capacity of 650 litres. It is used to mature port wine and normally used as finishing in the whisky industry.

This is a short, fat and dumpy barrel with a wide diameter. Its capacity is 650 litres as well. These drums are solely used in the Madeira wine industry and occasionally used as a finish in some whiskies.

Gorda is a huge barrel with a capacity of 700 litres. It is made of American oak and occasionally used to mature whisky. Most of the time, it is used for the marrying of different whiskies for blended or vatted whisky production.

How Different Casks Influence the Taste of Whisky
Scroll to top