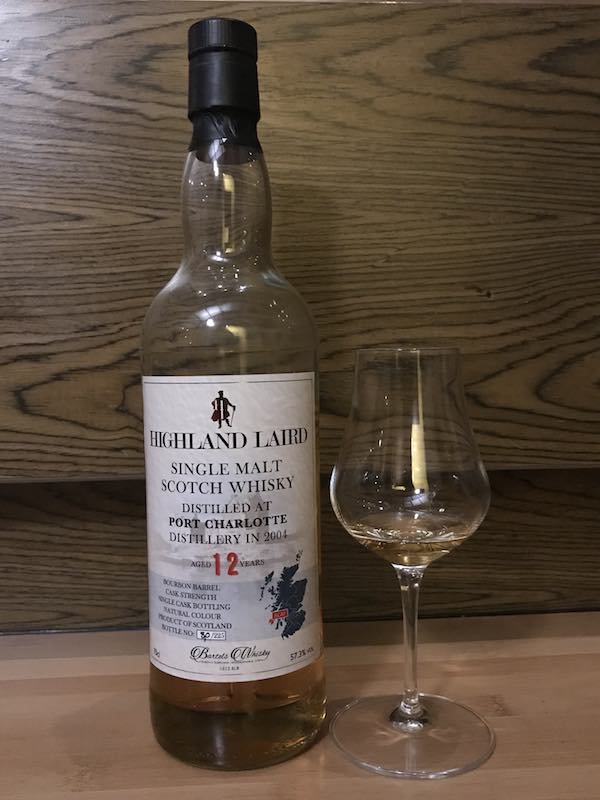 We drank many expressions from Port Charlotte, especially the official bottling. The peak of our Port Charlotte adventure, however, came in the form of the abovementioned bottle – the Port Charlotte 2004. A 12 years old expression bottled under the Highland Laird label by Bartels Whisky, it is a beast of a Port Charlotte! Bottled from a single bourbon barrel (#900) at cask strength, only 225 bottles are available worldwide.

We tasted it blind, and these are the reasons why it impress us so.

Nose: Cereal notes are prominent at the first nose, sweet and fulfilling. It reminds me of a beautiful Bruichladdich I once had. I thought it was a Bruichladdich, but then the peat smoke appears after a couple of minutes. Gentle at first, and then slowly gaining prominence. Floral notes, vanilla cream and lemon peels surface after the peat smoke, and the cereal notes continue to linger. All of these beautiful aromas mingle delightfully to give a fantastic nose! (18/20)

Palate: Sweet cereal notes, gentle peat smoke and floral notes come together at first with a tinge of sharpness from the high abv. Then vanilla cream and lemon peels come in to add complexity to the already beautiful notes. As I swallow, the peat smoke expands to engulf the palate for a while before mellowing down back to sweetness. At this point, I am no longer in doubt that this is none other than a peated Bruichladdich – Port Charlotte! (18/20)

Finish: The finish is long and yet subtle. The sweetness lingers from the palate, and there is this oakiness to the finish. However, it is not astringent or dry, making the dram extremely satisfying. It took me more than a couple of minutes to identify its identity as a Port Charlotte due to its complexity, but it is fantastic! (18/20)

Body: It is a superb balanced dram that is easily one of the best Port Charlotte I ever had so far. Well-rounded and balanced on all its notes, it also is a fitting expression to represent the distillery. (37/40)

Geek Flora: “This is one of the best Port Charlotte I ever had. The other one which impressed me much was a MoS Port Charlotte, but this easily tops that with the amazing complexity. I suppose Port Charlotte still works best in a good ex-bourbon barrel, and perhaps, the guys at Bastel Whisky get this right on every note! Well done! Now, please excuse me while I go hunt for a bottle or two of this to bring back home.” 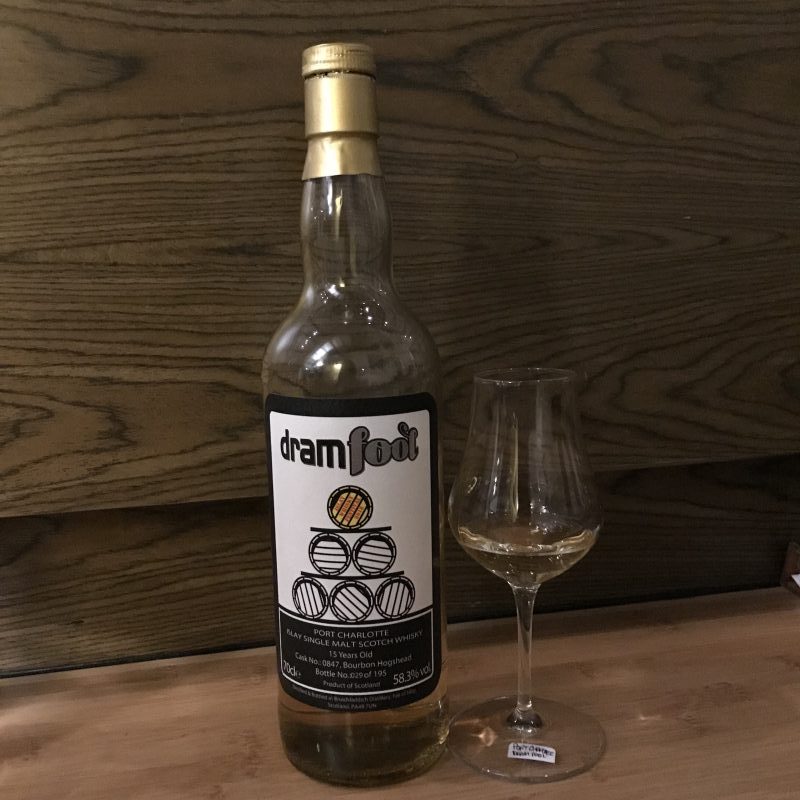 There isn’t much information that I could find online about Dramfool. What I do know is that Dramfool is the brand name of an independent bottler and that the owner’s name is Bruce Farquhar. According to Bruce’s LinkedIn Profile, he is an experienced engineer who is now the director of Dramfool.

This review focuses on one of Dramfool’s recent releases for the Islay Whisky Festival Exclusive Bottling that happened to be Dramfool’s 13th release. It is a Port Charlotte, distilled in December 2001 and bottled in December 2016. Dramfool bottled the whisky at cask strength of 58.3%. There are only 195 bottles available.

Nose: The first notes I got was coastal salt and peppery spice. There is light vanilla cream in the background. Sweet barley notes surface after a few minutes. Gentle peat (soot?) wafts into the nose after 10 minutes, and lemony notes appear underneath the peat. (17/20)

Palate: Sweet barley comes quickly but peppery spice attacks right after the sweetness. After the spice mellows, coastal salt, vanilla cream and lemon notes appear all in succession. The gentle peat comes at the back of the throat. (16/20)

Finish: Medium finish with sweet barley and hints of vanilla. (16/20)

Geek Flora: “Well, it was a nice dram, but not something that gets me excited. A typical Port Charlotte profile is pleasurable but not fantastic. I guess I was looking for more as I had a great experience with the MoS Port Charlotte previously. You can find our review here“

Geek Choc: “Port Charlotte was not high on my list usually, and this is no surprise. I think it is a simple dram, balanced but not complex enough.” 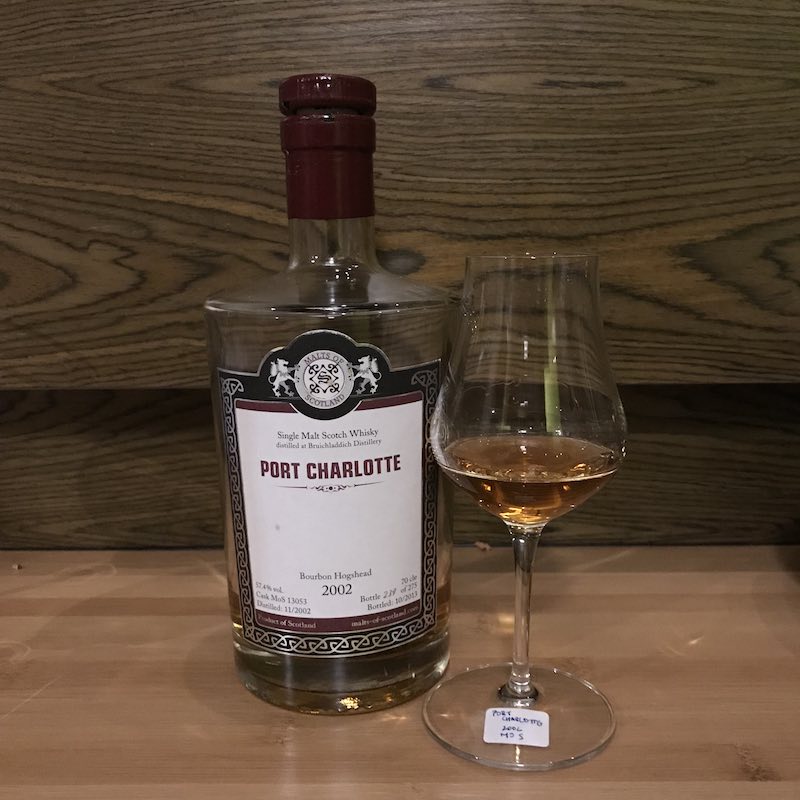 Thomas Ewers heads MoS and earns the reputation of a “whisky talent” at a young age. His first foray into whisky was in 2003 when he had his first single malt. The second dram of a 10-year-old Aberlour sealed his fate as a whisky lover and eventually an independent bottler.

The bottle under review today is a Port Charlotte distilled in 2002 and bottled in 2013. Matured in a bourbon hogshead, it has been known to give rise to tasting notes such as “baby vomit”, “rotten milk” and “spoiled milk” at the bar where we had this.

With such a fascinating reputation, let us get started to see if we can find the “baby vomit”.

Nose: Smokey and sweet. Dark, dried red fruits with smoke. It is gorgeous indeed. The nose boasts of notes typical of a sherry cask, but this is a bourbon hogshead! Isn’t that amazing? Raisins, dried figs, stone fruits are all presented in the nose. Sweet and beautiful indeed! (17/20)

Palate: Sweet and flavourful, with smoke in the background developing beautifully as we drink. Raisins, sultanas, figs and cranberries combined in a sweet and fruity palate. Hints of raspberries are detected in the back of the throat. That sourness from the raspberries may be the answer to the “baby vomit” and “spoiled milk”! (18/20)

Finish: Long and smokey! Cranberries and raisins linger forever and ever. Gets a little dry after a while and almost feel like an elegant, old red wine. (18/20)

Body: This is balanced brilliantly. The smoke is consistent from the nose to the finish. Add the raisins and dark fruits, and you get a divine drink! (36/40)

Geek Flora: Well, well, well, this is an exciting tasting of a Port Charlotte. I like the uniqueness of this whisky, and it is an excellent example of how independent bottlers can make a whisky better.

Geek Choc: I must be honest and say that I am in the camp of those who think of “baby vomit” when I tried this PC. Not my favourite for sure. 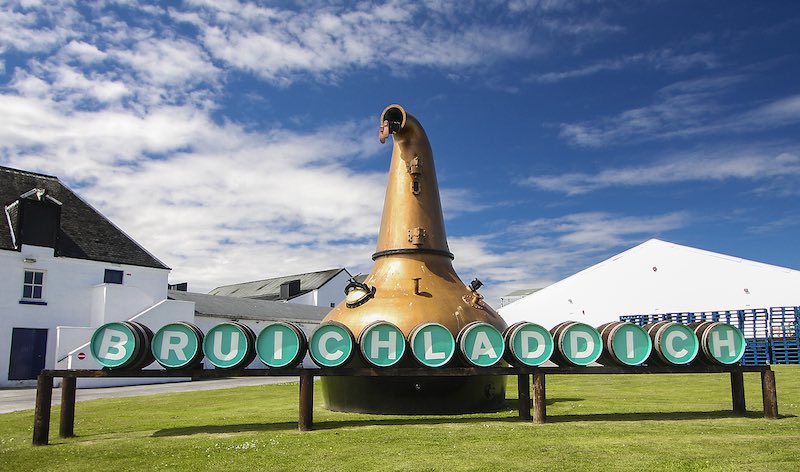 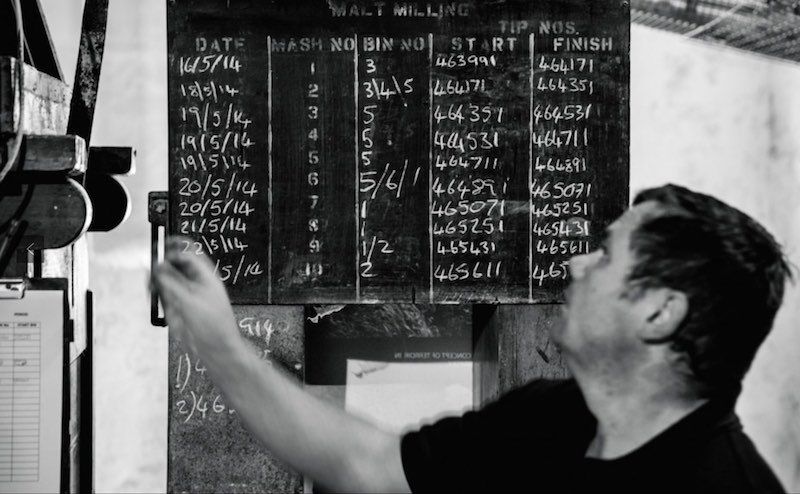 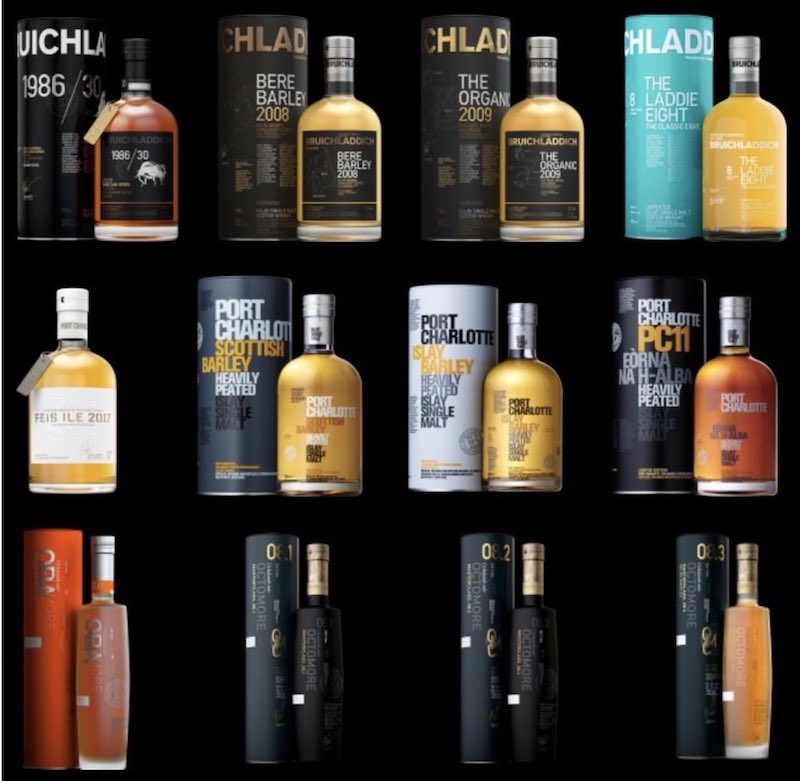