We were excited to be part of the Glen Scotia Virtual Tasting hosted by The WhiskyStore. The distillery is part of the triplets in Campbeltown, but its smaller size often gets overshadowed by its neighbours. The team at WhiskyGeeks has been following Glen Scotia for some time now, as we find its liquids really palatable and beautifully matured.

It was, therefore, with great anticipation, when we joined the Zoom tasting on Tuesday, 14 July at 8 pm. Follow our journey as we partake in one of the greatest virtual geek fests with Glen Scotia!

First, an Introduction of the Speakers 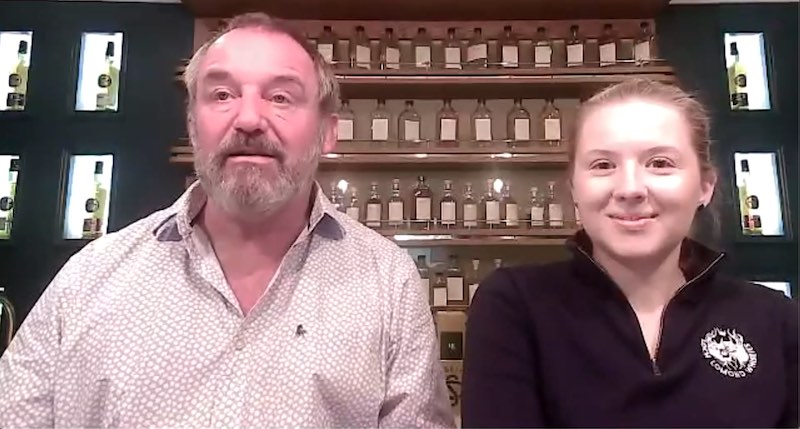 The second speaker is Ms Ashley Smith, the master blender at Loch Lomond Group. Ashley has eight years old experience working in the whisky industry, but she has only joined the company for about ten months. Her work revolves around whisky blending (of course!) and she has her hands full with the single casks programme as well as ensuring that the core ranges from both Glen Scotia and Loch Lomond are consistent.

The year was 1597, and an act of Parliament established Lochhead. Settlers flocked to the sea-side town, and by 1607, various traders and settlers were setting up businesses in the town. The Kintyre peninsula (where Lochhead was) had plenty of local ingredients for distilling, and soon, industrious settlers built illicit stills to make whisky. It wasn’t until the mid-19 century that the town became Campbeltown, named after the local lairds, the Campbells!

Campbeltown quickly became the whisky capital, with 21 known illicit stills in the town and 10 in the surrounding countryside by 1795. There were probably more than 50 illegal distilleries in total by the 19 century. The Victorian Era was booming with economic activities, and there was a growing market for whisky both at home and in the USA. Cargo ships meant to carry whiskies to the USA would call at Glasgow and sail down the Clyde, called in at Campbeltown as their last port call before taking the journey to the USA. Therefore, the town proliferated to become the “whisky capital of the world”. 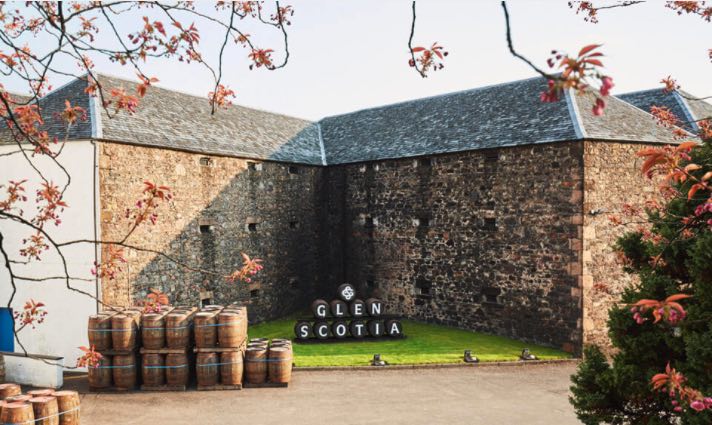 The survival of Scotia distillery depended on its owners. James and John managed the distillery until 1895. It became one of the founding members of West Highland Malt Distilleries in 1919, with five other Campbeltown distilleries in an attempt to share costs and prevent closure. The project failed, and Scotia was left standing alone. In 1924, Duncan MacCallum purchased Scotia but closed to close in 1928. When he reopened the distillery in 1930, he met with an unfortunate scam in which he lost his savings and committed suicide. The Bloch Bros brought over Scotia and added the word “Glen” to its name. Glen Scotia was born.

The Happening after the 1930s

The Bloch Bros saved Glen Scotia. They retained ownership of the distillery until 1954. That year, Canadian giant, Hiram Walker bought the distillery estate but quickly sold it to A.Gillies & Co – a blender in 12 months. The distillery changed hands again and became part of Amalgamated Distilled Products Ltd (ADP) which owned Barton Brands (including Loch Lomond). Glen Scotia started reconstruction works towards the end of the 1970s, but unfortunately, it closed between 1984 and 1989. During the closure, Gibson International bought over ADP’s distilling assets. Glen Scotia reopened in 1990 under new leadership. In 1994, Glen Catrine Bonded Warehouse Ltd bought over Glen Scotia and promptly mothballed in. It returned to full production only in 1999 under the Loch Lomond Distillers Group.

The mash tun is a relic at the distillery. Made of cast iron, it dated back to the Victorian era and held the history of the distillery within its pits. The mash tun uses a rack and pinion system (shown in the second picture above). The team uses four streams of water for wort extraction. The first two streams, with a temperature between 64 and 76 degrees Celsius, enable the collection of wort. The third and fourth streams, added at 85 degrees Celsius, allowing the collection of sparge. The process takes about eights hours to complete, and the distillery does ten mashes per week. The distillery’s water source is Crosshill Loch, providing them with fresh, clean, soft water.

The team cools the wort to around 17-18 degrees Celsius before pumping it into the washback for fermentation. The reason is to prevent the temperature from killing the active yeast. 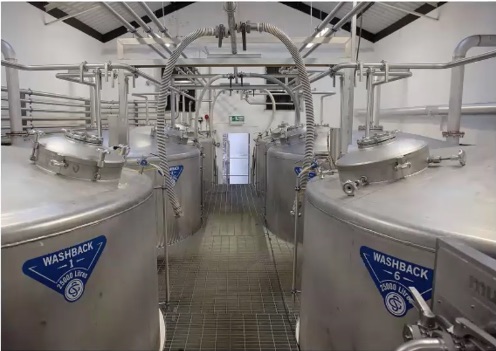 The fermentation at Glen Scotia is long, with each cycle lasting more 92 hours on average. The long hours creates what is known as a “second fermentation” where fruity esters are developed to give the wash a fruity flavour. The distillery uses commercial distiller yeast as it is best suited for them to create the fruity wash. 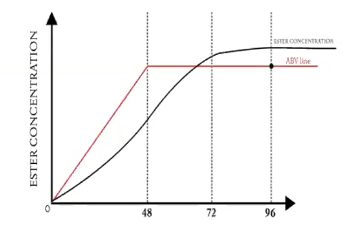 Look at the graph above. You will notice that after 48 hours, there is no longer alcohol production, but the ester concentration keeps going up. This is the reason why long fermentation produces fruity wash, which, in turn, will create a fruity spirit. The alcohol percentage of the wash is around 8-9% abv.

We understand that Glen Scotia has both internal and external washbacks. For the outer washbacks, they have cooling jackets on them to maintain the temperature at an ideal level. 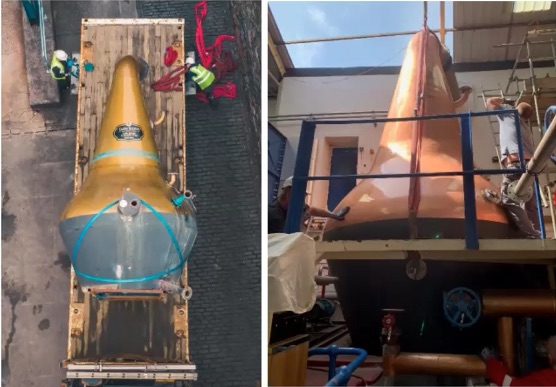 The wash still takes in the wash at 8-9% abv. After the first distillation, the low wines stands at around 25% abv. The spirit still then takes in the low wines and increase the alcohol percentage to about 74% abv. The foreshots or head is between 74% – 71% abv, while the heart runs from 71% to around 63% abv. The feints are below 63% abv.

The average alcohol percentage of the new spirit is 69% abv, and the distillation team will add water to lower the abv to 63.5% abv before transferring it to the casks for maturation.

Glen Scotia has three kinds of warehouses – dunnage at the Visitor Centre (around 150 casks), palletised and racked warehouses (for the rest of their casks). The different environment provided by the warehouse help Glen Scotia to achieve the differences in their whiskies, which work well for the brand. Currently, the distillery has about 12,000 casks onsite. Typically, the distillery fills 99.9% of their new spirits into first-fill ex-bourbon casks. We also understand from Bill that the oldest cask currently still maturing on site is over 45 years old! We were excited as Glen Scotia recently release a 45 years old bottling, which means there is a chance that they will release something older in future!

The WhiskyStore selected four whiskies for the session. My personal favourites are the 15 Years Old and the 25 Years Old, both of which showcased different styles. Every expression has its fans, but the 25 Years Old was the ultimate winner.

The Glen Scotia Double Cask is a non-age statement expression that is matured in ex-bourbon casks and finished 6 to 12 months in Pedro Ximenez casks. Bottled at 46% abv, it is gentle and easy to drink. The sweetness of the PX casks complements the bourbon maturation beautifully.

One of my personal favourites is the 15 years old expression. Matured fully in ex-bourbon American oak casks, the whisky is fruity with cedarwood and hints of pine trees. The sweet, fruity palate coupled with some dryness in the finish keeps me going for more.

The 18 years old expression is a favourite for many participants. Matured 17 years in refill ex-bourbon casks and finished one year in first-fill Oloroso sherry casks, the whisky is flavourful with a complexity of both bourbon and sherry influences.

Finally, the 25 years old expression is the crowd favourite! Matured fully in ex-bourbon American casks and then married in first-fill bourbon casks for the extra flavours, the 25 years old Glen Scotia is full-on fruity with tropical fruits such as pineapples, guava and hints of mangoes. It also developed vanilla, coconut and pine wood. The finish is not as dry as the 15 Years Old expression, but it continues to beckon me with its long finish.

The WhiskyStore is the official distributor of Glen Scotia in Singapore, and you can easily find all the above expression at their online store. If you are not ready to commit a bottle, you can still try the tasting sets available.

What to Expect Next Week

The Loch Lomond Powerhouse – Bill and Ashley – will be back next week with a Loch Lomond presentation! They promised that it would be another geekfest, one that is better than we had with Glen Scotia. If you enjoyed our post, don’t forget to head over to the Whisky Store to purchase your Loch Lomond Tasting Set and join us next week!