BenRiach has always been GlenDronach‘s shy sibling, but not anymore! Dr Rachel Barrie has shaken up the core range and BenRiach is getting more of the spotlight!

BenRiach is a distillery in Speyside, known for its experimental distillation and maturation ever since Billy Walker bought over the distillery in 2003. Why do I spell BenRiach with a capital R? It’s Billy Walker’s signature mark to capitalise a letter in the middle of the name, like GlenDronach or GlenAllachie. Pretty much like the late Stan Lee’s cameos in Marvel movies. Being one of the first few distilleries in Speyside to triple-distil their spirit shows how willing they are to break regional stereotypes and experiment! They even started distilling peated spirit since the 1970s!

In some whisky circles, BenRiach single malts have been known as the ‘chameleon malt’. To clarify, this means that the spirit character adapts well to various casks and cask finishes. What is cask finishing? It is taking a matured whisky in a more gentle cask, usually American white oak casks and transferring the whisky to another cask to add a layer of flavours. And just how adventurous was Billy Walker with cask-finishes? Well, just for example, if you would look into the archives, BenRiach has gone into Madeira casks, Sauternes casks, dark rum, tawny port and wine casks! The spirit worked well, fitting into various casks of different flavours, like a chameleon changing colours based on its environment. However, some people find it difficult to pin down BenRiach’s signature spirit character.

The baton is in good hands

So, how has Dr Rachael Barrie changed the new range? In my opinion, I think that she played to the strengths of BenRiach’s chameleon character whilst addressing its confusing nature. That is to say, the new bottlings feature BenRiach matured in ex-bourbon barrels and finished in casks like Jamaican rum, Port, or Marsala and blends it with full-term matured Benriach to create unique flavour combinations. In my opinion, this is absolutely genius! It showcases BenRiach’s chameleon nature with cask finishes whilst securing a consistent house-style with ex-bourbon maturation. In addition, Brown-Forman, who owns several American Whiskey distilleries, is also providing BenRiach with quality ex-bourbon casks!

The new packaging is ironically a call back to the packaging of BenRiach in the 1990s, when BenRiach was owned by Seagram’s.

The Original Ten is a combination of peated and unpeated spirit. As a result, the blend produces a lightly smoky malt, which was what some Speyside whiskies were like in the past. Bottled at 43%, the label declares the casks used, namely, Bourbon casks, Sherry casks and Virgin casks. This is largely ex-bourbon dominant, so this bottling has a more fruit-forward character with a trace of smoke that becomes a little more distinct with time and a couple drops of water!

Out of the four new releases, I really enjoy this the most! I was surprised by the blending expertise that ensured the balance between peated and unpeated Single Malt. It gave me flashbacks of the Arran Smuggler’s Series. Although, I would love to see a version of this at an abv of 46% or higher someday!

The Smoky Ten is a revamp of the 10yo Curiositas, but a little funkier! This 10-year-old single malt features some peated BenRiach with a Jamaican rum cask finish, giving it more fruitiness! With the Virgin oak contributing more to the body, I would say that this would be a delightful daily dram for a peat lover!

I expected this unpeated 12yo to be pretty popular in the room for the media event, and it was. Being based on the previous sherried BenRiach 12yo bottlings, this now features a combination of full-term sherry matured single malt with some Port-cask finished stock. In my opinion, this brings about more of that bourbon-cask fruity house style. For any sherried malt lovers, this bottling would be something you might want to try!

This is a rather interesting entry, as it offers the BenRiach peated experience with a bit more European oak spice notes from the sherry and marsala casks. I like it that the core features casks from more unique fortified wines!

As a person who causally blends whiskies as a small party trick or for my own enjoyment, I can feel the expertise and mastery of the art Dr Rachel Barrie has put into this core range. And I know it’s out of her control, and I know Brown Forman does want to make BenRiach appealing for the mass market, but I do wish some of these entries were unchill-filtered so I could really get the full character of BenRiach. Maybe we need to start educating more whisky drinkers to understand the beauty of scotch mist!

If you’re interested in the new bottlings or the old unchillfiltered bottlings, do check out MaltWineAsia with this link! They have both! There are some cask strength single cask BenRiachs under S$200 as well!
Special thanks to MaltWineAsia, Brown Forman and Stewart Buchanan! Look out for the BenRiach distillery article next week! 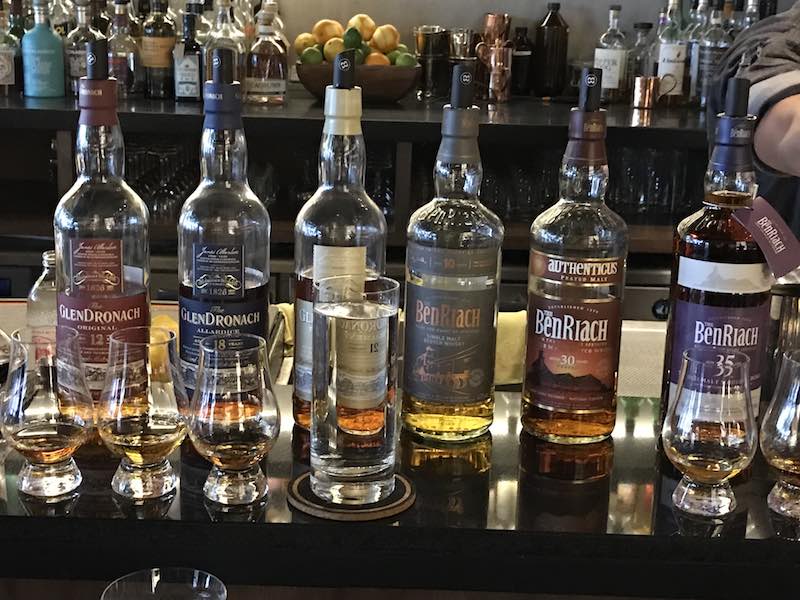 Glendronach and BenRiach distilleries are no strangers to our shores, considering the vast number of fans for the Glendronach single casks releases. We attended a private tasting session at La Maison du Whisky on 23 March 2018, hosted by none other than Stewart Buchanan, the global brand ambassador of Glendronach, BenRiach and Glenglassaugh. Alongside Stewart were a few other vital people of the brands. We had the pleasure to meet Finbar Boyle, the General Manager of Southeast Asia, Vincent Pantow, the Area Manager in South East Asia as well as Shirley Sum, the Trade Marketing Manager of Travel Retail, APAC.

Geek Choc and I were the first to arrive for the event, and we were soon seated and served with water while we waited for the rest to show up. As LMDW scheduled the event at 6 pm, it was natural for some participants to be slightly late due to work. Anyway, the rest of the gang soon turned up, and Stewart wasted no time and started the event promptly.

The initial tasting planned was to try five different whiskies. Three of the Glendronach’s core range – 12, 18 and 21, followed by two higher-end BenRiach – 30 and 35. The 30 Years Old was a peated whisky. Stewart, however, decided to add in a BenRiach 10, because he felt that it was essential for us to know how a “normal” BenRiach tastes like. We thought it was considerate of him, especially when some of the audiences have not tried a BenRiach before. 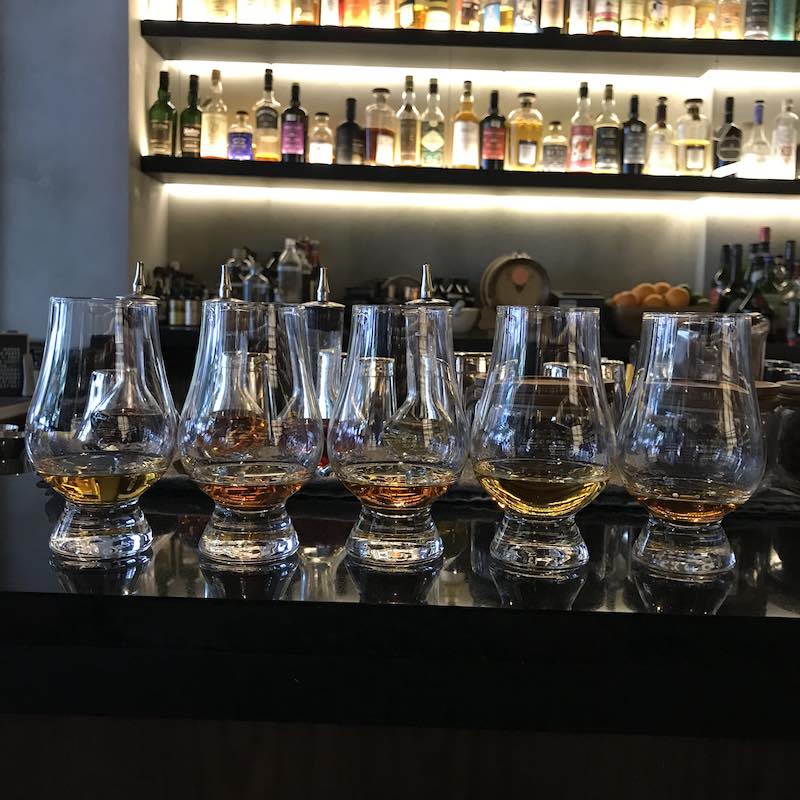 Glendronach distillery is one of the few fortunate distilleries that avoided a closure back in the 1900s. As a result, the distillery’s use of sherry casks did not stop, and today, it is one of the most sought-after sherry bombs in the industry. As many of Glendronach’s fans would say, “Nothing seems bad when you are sipping a Glendronach!”

For the geeky us, we were excited when Stewart started speaking of production! We understood from Stewart that the reason the Glendronach is rich and viscous is due to the way they run their production. The time that Glendronach seeps their barley, the hours of fermentation and even the way the casks are used all played a part to create the end product. Nonetheless, in Glendronach, casks are but a supplement to the rich spirit that they produce.

Stewart started with the Glendronach 12 Years Old. A young whisky by the standard of what’s on offer, the 12 Years Old does not disappoint. With 80% oloroso casks and 20% PX casks, the 12 Years Old boasts of caramel, spice and barley sweetness. The long finish is a bonus too.

The Glendronach 18 Years Old Allardice was up next. The word ‘Allardice’ simply referred to the founder James Allardice. The 18 Years Old is made of 100% oloroso casks which make the whisky drier and spicier. The nose also holds some leathery notes while the long finish is tannic and astringent.

Moving on, we came to the Glendronach 21 Years Old Parliament. Now, the name Parliament has a special story behind it. It has nothing to do with the government or politics. It actually means a flock of crows! A group of crows is called a parliament. Why is there a reference to crows? According to Stewart, the men operating on the illicit stills of the past depended on the ravens to alert them of excisemen in the area. As they hid deep inside the forest, any disturbance by the excisemen would cause the crows to make noise. That became a signal to the illicit stills operators!

The Glendronach 21 Years Old is again, made up of 80% oloroso casks and 20% PX casks. The prolonged maturation allows the PX-influence to shine, making this expression sweeter and yet, rich and robust. The long finish is a balance of caramel sweetness and tannic dryness.

Stewart moved on to BenRiach soon enough. BenRiach sat 600 miles from Longmorn and was mothballed in 2002. Fortunately, Billy Walker bought the distillery and reopened it in 2004. Since then, the distillery has been growing rapidly and moving from glory to glory. Today, BenRiach has some of the richest Speyside spirits and excellent peated ranges that are highly sought-after.

BenRiach also used water with more minerals, which produces more esters during long fermentation. As a result, BenRiach is very fruity even at a young age. Interestingly, BenRiach also has one of the most extended middle cut in their spirit bank, which makes for a fascinating distillery tour as you get to taste the different new make at different cuts.

The BenRiach 10 Years Old uses a combination of bourbon, virgin oak and sherry casks. Boasting notes of honey, butterscotch, vanilla, grapefruits and zesty citrus, it is perfect as a dessert whisky. The long finish helps to keep the fruitiness in the palate long after you swallow it. This is one whisky that is ideal as an introduction to a non-whisky drinker too!

The BenRiach 30 Years Old Authenticus is a unique peated expression. Peated at 55 ppm, it is considered a heavily peated whisky. Now, a highland peated whisky is different from an Islay whisky, mainly because of the peat that was used. Highland peat does not produce the iodine element that you usually associated with Islay peat, making it less pungent and more fragrant. This expression is a combination of American and sherry hogsheads.

The 30 Years old boast some spice notes before a breathe of smoky peat comes thru beautifully. Sweetness than comes in before turning into dry, herbaceous notes. The finish is long and dry.

That probably explains the unusual notes that we get. The 35 years old is both sweet and grassy with medium spice that dissipates quickly. A yummlicious whisky for sure, and one that may confuse you just a little!

The event ended fairly quickly after that and Stewart did a round of autographs before bidding all of us good-bye. It was a great insight into Glendronach and BenRiach, and we look forward to more tasting sessions in the future!